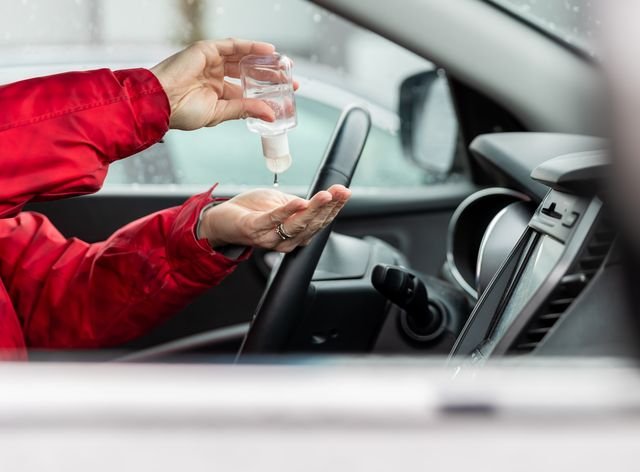 Without being alarmist, the rising temperatures mean the inside of your car will get hot very quickly—so don’t leave a bottle of hand sanitizer in there, just in case.

The fire department of Oconomowoc, Wisconsin, has issued a warning that alcohol-based sanitizer bottles should not be left in cars because there’s a possibility they could explode. Their warning is echoed by the National Fire Protection Association, which issued a video in April 2020 saying hand sanitizer's flash point is below 70 degrees Fahrenheit, which means a bottle of it doesn't need any external heat source to give off flammable vapors. All it would then need is a flame source—someone smoking in the car, for instance—for it to be in danger of explosion. The CDC considers alcohol-based hand sanitizer a flammable liquid “which readily evaporates at room temperature into an ignitable vapor.”

But the Wisconsin firefighters posted the alarming photo above on their Facebook page, which subsequently spread to CBS News and elsewhere, showing a door blown apart by an explosion. It turns out, as the Poynter media group reported, that this photo depicts a deliberate explosion set in 2015 that had nothing to do with any hand sanitizer. It is extremely unlikely that your personal sanitizer bottle will cause that, the firefighters admit, but they still say that with just the wrong combination of concentrated bright sunlight and excessive heat on a bottle of hand sanitizer, it could happen.

So, do you have to worry the bottle will spontaneously blow up in a hot car? Probably not, but why would you risk it? Take it with you when you get out of the car.