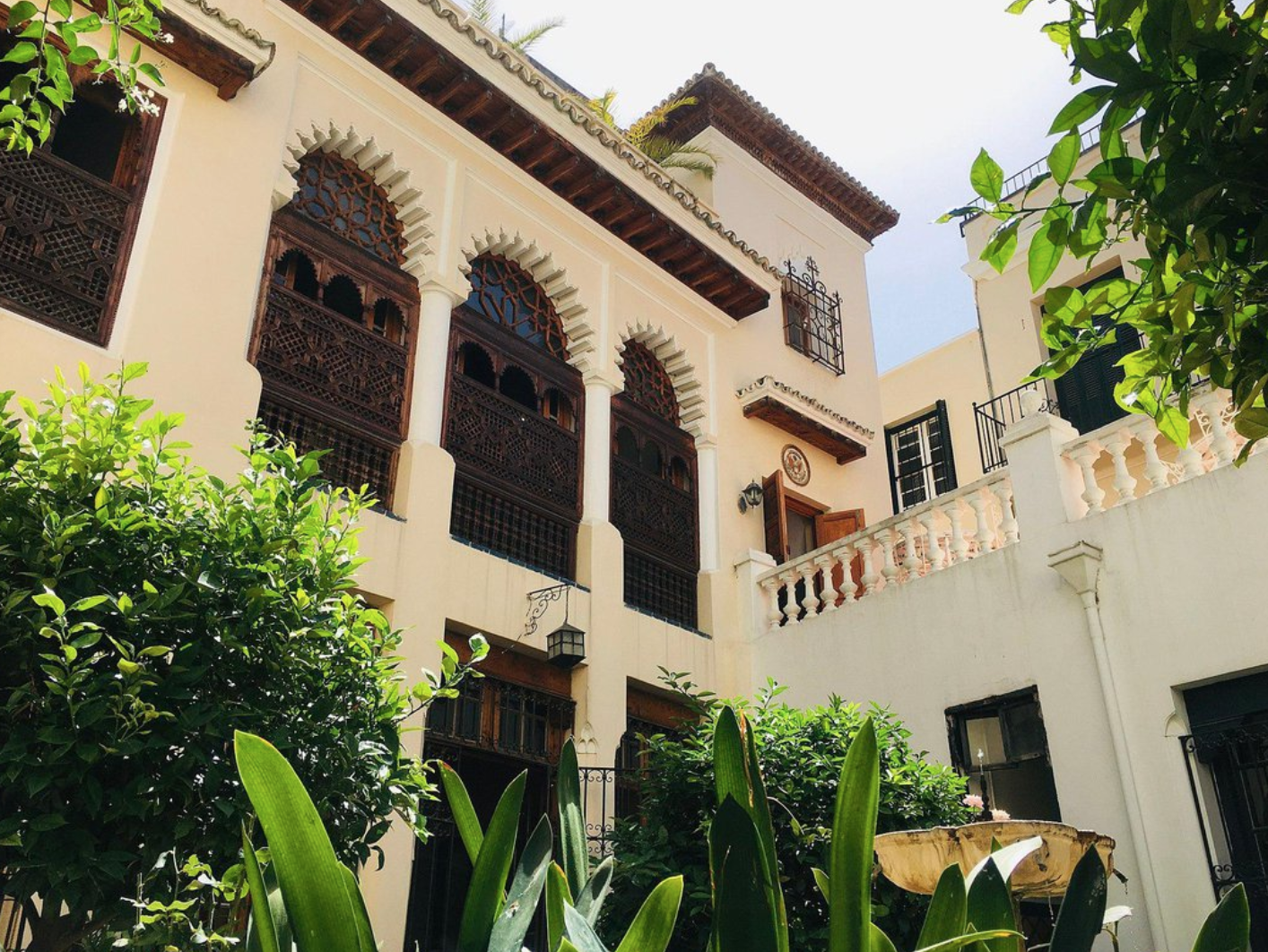 Morocco may seem like a strange place for a U.S. national historic site, the only one in a foreign country, but the North African nation may very well be the United States’ oldest friend. In 1777, as various European powers debated whether or not to intervene in the American War for Independence, the Moroccan sultan, Moulay Mohammed ben Abdallah, issued a proclamation recognizing U.S. independence from Britain, making his nation the first country to do so. The Sultan’s decree welcomed American ships to “come and traffic freely” in Moroccan ports. His hope was to increase maritime trade—and customs revenue—and saw the new nation as a potential trading partner.

Compared to France, Britain and Spain, the U.S., once established, had relatively few interests in Morocco. Yet its location on a critical trade route through the Strait of Gibraltar and the challenge of Barbary pirates in the vicinity made a more official presence for the American necessary. Established 200 years ago, on May 17, 1821, the Tangier American Legation is a rambling mansion that spans two sides of the Rue d’Amerique in the southern corner of the medina, or old walled city, of Tangier, which at the time was Morocco’s diplomatic capital.

A gift from the Moroccan sultan to the U.S. government in 1821, the structure has over the years been a diplomatic residence, a working consulate, a Peace Corps training center, an espionage headquarters, a museum, a research library and a community center. “It is a work of art and service in the process of becoming,” says Dale Eickelmann, the Tangier American Legation Institute for Moroccan Studies (TALIM) President and Dartmouth anthropologist. And for two centuries, it has persisted as a powerful symbol of American cultural diplomacy and the friendly relationship between Morocco and the U.S.

In the 19th century, Morocco’s sultan and his main government institutions moved between the inland cities of Fes and Marrakesh, but his foreign minister, the niyab, operated out of Tangier, where most European powers kept a full-time representative. The U.S. lacked an established physical presence in the city, and Sultan Abderrahman offered a small house to the fledgling nation. It was not exactly the hottest piece of real estate in town. Early neighbors included a brothel—later incorporated into the Legation—while mice and moisture wreaked havoc on the consulate’s files and books.

Twice, the diplomats stationed in Tangier found themselves faced with exceedingly generous, but very hungry, gifts from Sultan Abderrahman pet lions. In the latter instance, in 1839, consul Thomas N. Carr from New York, both a lion and lioness showed up on the Legation doorstep after weeks of rumors of their impending arrival from the imperial court in. Refusing the gift would be a major etiquette faux pas, but housing it at the Legation would be a logistical nightmare and a financial hardship. Carr wrote to the U.S. secretary of state, “To persist in the refusal would be to destroy the good feeling with which this consulate is at present regarded, I was compelled to surrender to this novel form of attack and to open one of my rooms for the reception of the animals.” Congress authorized the expense of shipping the lions to Philadelphia, where they were auctioned off for $375. 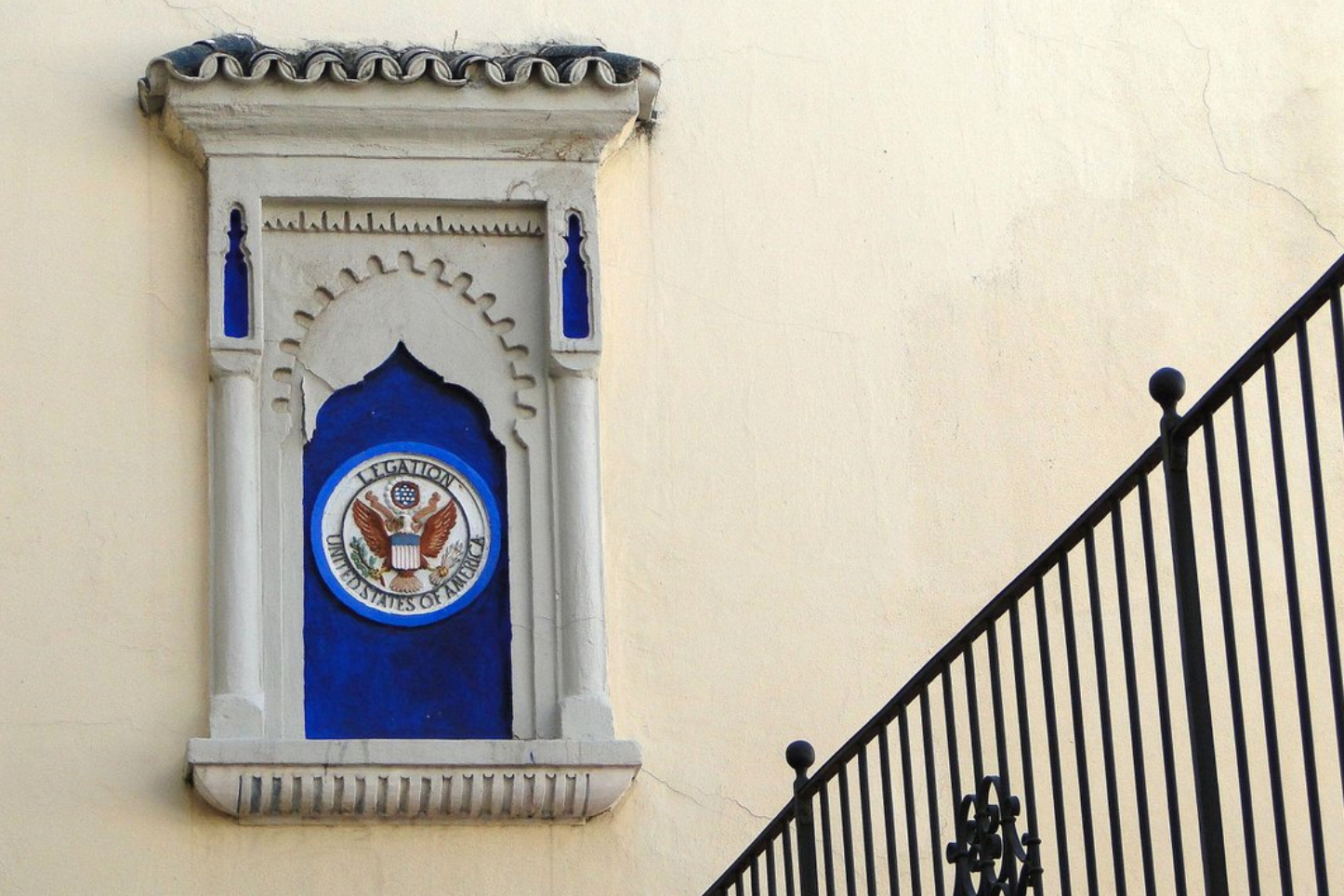 A gift from the Moroccan sultan to the U.S. government in 1821, the structure has alternatively acted as a diplomatic residence, a working consulate, a Peace Corps training center, an espionage headquarters, a museum, a research library and a community center. Adam Jones via Wikimedia Commons under CC BY-SA 2.0

Inside, the Legation today encompasses 45 rooms, climbing five stories high. At the very top is a conference room that must have the most spectacular view of any room of a National Historic Site. On a clear day, one can see the hulking Rock of Gibraltar across the blue strait and can make out the whitewashed houses of the beach towns of Andalusia just across the water in Spain. Ferries, fishing boats, cruise ships, and massive cargo ships ply the route, with the wide, graceful curve of the Bay of Tangier just below.

This vantage point came in handy during the U.S. Civil War, when U.S. Consul and staunch Unionist James DeLong would use his vantage point to watch for Confederate ships entering the Strait of Gibraltar. In one of the Legation’s most famous episodes, DeLong arrested two Confederates who had arrived in town on a French ship on the way to Cadiz, Spain. The arrest set off a small riot among the city’s European residents, who were angry at the arrest of a passenger on a French ship (and very likely sympathetic to the Confederate cause). U.S. Marines had to come ashore to help secure the building and escort the prisoners out of the city.

The U.S. military has since made more celebratory visits to the Legation. In 1987, to commemorate the 200th anniversary of diplomatic relations between the two countries, the U.S. Navy’s Sixth Fleet sent the Navy band to play a concert in the Grand Socco, Tangier’s vibrant main square just west of the Legation. But the city’s Grand Mosque sits on the edge of the plaza, and as the band got ready to launch into its first number, the muezzin let out the call to prayer. “The band then had a great challenge,” I. William Zartman, longtime TALIM President and international relations professor at Johns Hopkins University, recounted, “What do you do? Do you keep playing? Luckily, they had a strong diplomatic streak, and so they stopped, let the muezzin call the people to prayer, and then struck up the music.”

For Yhtimad Bouziane, a Tangier native and the Legation’s associate director, the Legation embodies her city’s hybrid European-Moroccan character. “Tangier’s old city is not like other Moroccan cities, like Marrakesh, Fes, or Tetuan,” she told me by phone recently, “As a city, Tangier is really cosmopolitan, and we can read that history in the walls of the Legation. We can read the city’s openness and tolerance in these walls.”

The building as seen today owes much to Maxwell Blake, U.S. consul to Morocco from 1910 to 1917 and then again from 1925 to 1941. He was independently wealthy and invested heavily in the Legation’s beautification and growth. He built the iconic “Arab pavilion,” bringing in master craftsmen to do the work using zellij tilework from Fes. He bought an adjacent property—the former brothel—to expand the footprint. But in the 1970s, the Legation began to fall into serious disrepair. A group of sympathetic former foreign service officers and diplomats in New York started a new organization, the Tangier American Legation Museum Society (TALMS), to protect the property and turn it into some kind of museum space. The building still housed a small but interesting collection of maps, rare books, and historical newspapers from Tangier, as well as a collection of art by some of the city’s famous Moroccan and expatriate artist residents. But it needed organization, leadership and money to preserve what was there.

The State Department secured funds to renovate and restore, and the U.S. government still officially owns the building, but leases it to TALIM, a non-profit that operates the museum, library, and cultural center. The past few decades have seen the Legation become more than a museum and historic site to be a true community center for a city in the midst of rapid change and growth. Tangier residents have always worked in and with the Legation, serving as vice consuls, translators and secretaries during the consulate days and as teachers, librarians, and building managers in the second half of the 20th century. John Davison, TALIM’s current director, told me that “the most important thing that TALIM has done for Tangier is to be the best example in the city of repurposing a historic structure to meet the city’s new needs, educationally and as a cultural center for all the residents of Tangier.”

Its biggest draw for medina residents have been a series of women’s literacy classes. What began with ten reluctant participants in 1999 has grown to 150 today, limited only by space constraints. These classes led to further skills training workshops, small businesses, and even an embroidery collective. “We cannot do restoration without involving the population of the old city, and women and youth are the most important to get involved,” Bouziane told me, “We are truly an inclusive museum.”

The legation has always had an impressive and wide-ranging collection of paintings, drawings and photographs from prominent artists with connections to the city, but in the past few years, it has developed a reputation as a place for live music. Music in Africa magazine recently named it one of the best music venues in the country. During the pandemic, the legation quickly switched to online events, bringing Moroccan musicians to audiences around the world and allowing those of us longing for an escape to whisk away, if just for an hour or two.

In speaking with Tanjawis—as the city’s residents are known—and Americans with Moroccan connections about what the Legation means to them, one is struck by the diversity of answers. For some, the outstanding museum is the city’s best memory of a period in which Tangier was at the center of Moroccan and world history. For some, it’s an art space that has helped foster a thriving art scene in a booming city. Generations of scholars and researchers know it for its invaluable collection of historical books and documents. Others see it in historical terms. Zartman described it as “a cultural link between the United States and Morocco. A link that, if you think of a chain, that has been well-forged and so is resistant to changes in the times, in climate, resistant to strains, and which brings benefits to both sides by keeping us tied together.”

Graham H. Cornwell is a historian of the Middle East and North Africa and the assistant dean for research at the Elliott School of International Affairs at the George Washington University.